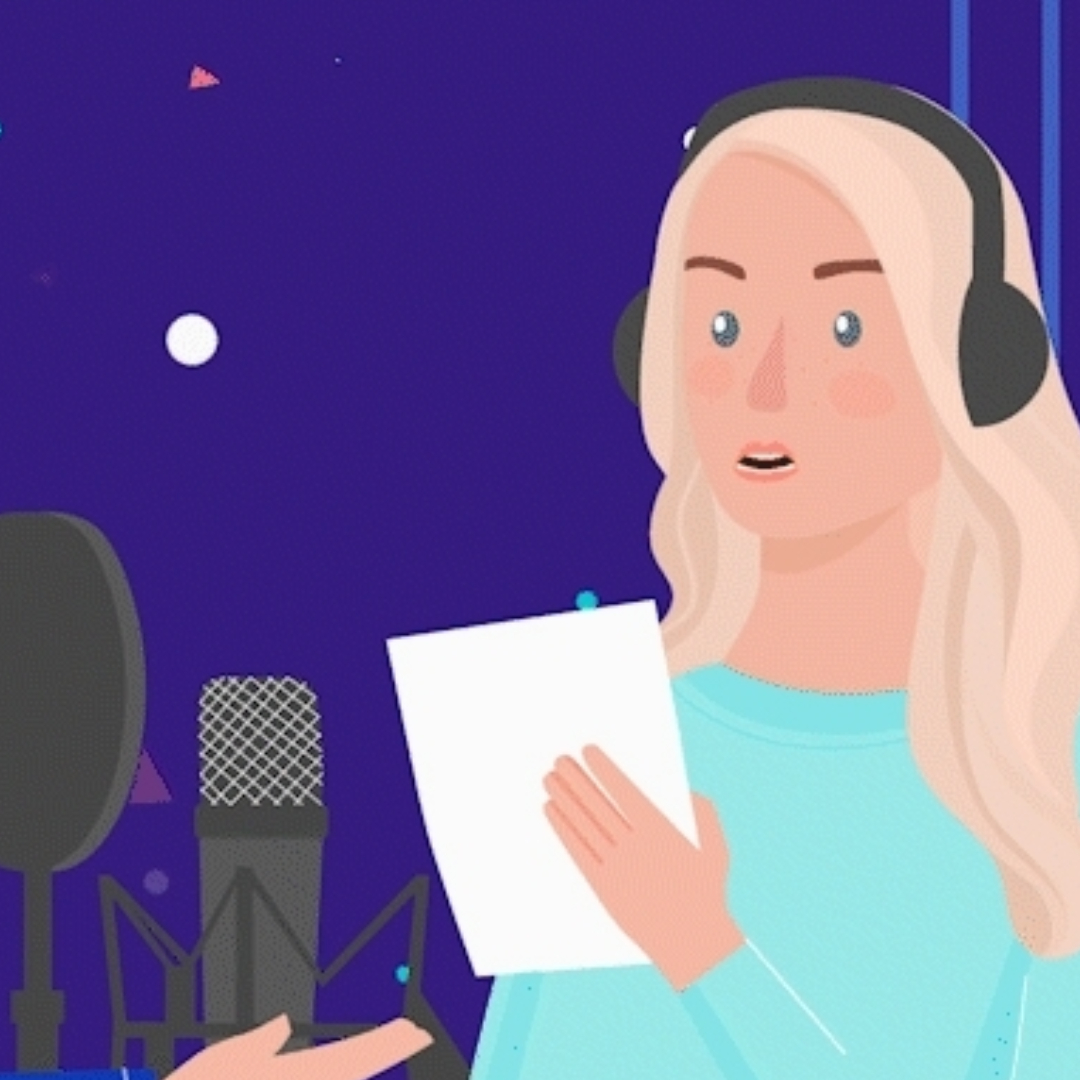 At Voquent, on a daily basis, we produce voice over in multiple languages for animated explainers.

So when we ‘bumped’ into specialist animation studio Darvideo on Twitter, we were eager to find out more about how it all works from their point of view and Darvideo’s producer Yuriy was delighted to speak with us.

Read on to learn more about the process of creating animated explainers and what animation studios like Darvideo expect from voice-over artists.

Q: What is the benefit of using animation instead of film?

Yuriy: Well, animation and film are used for entirely different purposes. For example, if you want to shoot a commercial or promo video you have to hire actors, look for locations, directors etc. If the shoot is planned outdoors, you have to be flexible due to changeable weather conditions. So, filming a video is much more expensive, due to these and many other reasons.

Animation, on the contrary, is not so demanding. You don’t need a big team or need to rely on the weather! The creative process is free from these constraints and you have the advantage of being able to edit an animation at any time. This something that’s impossible to do if you’re shooting video: if the scene has been filmed, you can’t do anything to change it, unless you have the budget for a new shoot of course.

In animation you can change the way characters moves, add scenes, add drawing etc. effortlessly. And this is what makes animation very convenient and cost-effective for our clients.

Q: How did you get started producing animations?

Yuriy: Before we started making animated videos, we spent eight years shooting commercials. It was in 2014 that we chose to focus on animations because there was a strong demand from the IT industry. Many companies and startups would order nothing but animation clips.

Animation is so useful because it is practical – it depicts situations, characters and ideas with ease. As a medium, animation works better with abstract services. If you need to show a concept – let’s say for example, how Uber works – all the aspects are easier to explain with animation than film. With animation you can easily show the problem, how to deal with it, and how the system works. It can include illustrations of a web of taxies and users navigating the app, and taking payments. Doing this in film would be a lot more challenging!

Another reason we decided to specialise in animation work is the limited possibilities of video.

If you are filming a video, you’re naturally tied to a geographical location. We could have clients only from Kyiv and Ukraine. If you’re making an animation, your team can be in one office or several, or even in different countries! It’s consistent work and this is the kind of work we were looking for. It allows us to work with clients anywhere and we work remotely with many clients, studios and companies all around the world.

Animation is still a growing industry. Not so long ago “a video clip” would refer only to a filmed video — for example, a video with a talking head or several scenes with actors. Animations widen the meaning of a video clip – and more people are choosing it now. It exists in many forms – from the short videos for social media, to cartoons, promo videos, explainers, kids content (built entirely on animation); and also many types of animation used in commercials – 2D and 3D.

Q: Darvideo has produced over 700 animation projects. What projects are the team most proud of?

Yuriy: Take a look at examples of four projects we’re really proud of:

For more details about how these videos helped to save our clients money go here.

Q: What is the normal process for getting an animation with you?

Yuriy: We came up with a 3-stage process to ensure transparency for the clients. The process starts with creating a storyboard or script. Then we make illustrations and record the voice-over before the final step – the animation.

At each stage, we allow the client to make two corrections free of charge. We are always ready to listen and implement corrections. The client is controlling the project at each stage. Many clients want to follow the creative process to see what’s happening and make decisions about it.

At first stage, we write a script and draw each scene to create the storyboard. So the client gets a document where he can see what a speaker is saying, the description of actions, and some sketches to get the idea of what the video will look like.

The second stage is illustration. We draw one scene from the video, including color, style and design. If the client is okay with the format, technique and other details of the video, we start work on the rest of the video. We also record a voice-over at this time.

Once it is all done, we make a slideshow clip or stylomatic.

The third and final stage is the animation itself. Everything we’ve drawn is brought to life. Characters start to act, move, and talk. Everything else in the video also acquires the quality of motion.

Yuriy: Basically, there is no difference – the stages remain the same. The three stages are suitable for 3 minutes’ video as well as a 30 second video. Even with a 10-minutes video clip, it will all be the same. The shortest video requires a storyboard, the process of choosing the animation style, recording voice over – all the same stages.

Q: What tools does your team use to plan and produce the animation?

Yuriy: Our Animators and artists use Adobe’s creative suite of apps such as Adobe After Effects, Adobe Illustrator, and Adobe Photoshop.

The project managers and scriptwriters use a different set of tools. To get feedback from the client, we use the program Frame IO. How does it work? We “post” a video clip for the client, and they can comment right under timelines in the video. Another great tool is Burts. We use it for creating storyboards. The program allows you to share work with the team and the clients.

To manage the projects, we use monday.com – a project management tool with a very simple and friendly interface. Our producers also use the Zoho CRM system to communicate with clients and keep track of projects.

Q: How do you decide how many characters there are and how they each sound?

Yuriy: We write a script based on briefings with the clients. We ask fundamental questions such as: What is important for you? What kind of format is preferred (entertaining video, instructional, commercial or explainer)? We also look at other animations (reference material) the client likes and watch videos that resemble what the client wants to achieve in his project – the structure of a story, characters, infographics, or some other approaches. This all helps us to understand how the client sees a video and what he is expecting to get.

Not everyone likes cartoon animation. Some people look for rather mild infographics or motion design, without any characters or humor. Many clients want a specific style of animation and this is why we show different examples of animations to understand what they like

How many characters there are is not that important. Often one role is usually enough – for example, if we are working with an app for ordering food.

On the other hand, if we work with a service that books stadiums, we should probably show a stadium with thousands of people in the audience. How exactly we do this in the animation is another question e.g. are they silhouettes or real characters? This is up to the art-manger.

In explainer animations the characters rarely speak because the voice-over does the talking. If the story requires conversations between characters, then we add it in and offer to record with more voices as required.

Q: Do you write the scripts or does the end customer do this?

Yuriy: Yes, our services include script writing. We have three scriptwriters working with us permanently. Each of them has a unique and different style. But, quite often, clients come to us with their own draft. We work together, and maybe rewrite some of the script and divide it into scenes.

Sometimes the client has more detailed ideas, and the script we make will be based on it. Also, we often work with other companies and studios that already have a script and even a storyboard. In such cases, the price will be lower because part of the work is already done by the client.

Q: Please make a guess – how many different voice-over artists do you hire per year?

Yuriy:  We have a few dozen voice-over artists that we work with regularly. With some of them, we are working every week. Others it’s once every three months. We regularly require European languages; more rarely Asian languages. Generally, we work in about 50 languages and a few hundred bookings per year.

Q: How important is the price when it comes to choosing a voice artist?

Yuriy: Recording with one voice-over artist is included in the price of all our animation services. So a client won’t pay for it separately from the animated video. However, if a client wants a unique voice-over artist or a specific voice we don’t already work with, it’s normally agreed at an additional cost.

Q: Do you only work with voices with a home studio?

Yuriy: We work with voice-over artists from different countries and in various forms of collaboration. It could be freelancers or professionals from TV. Our demand is not a home studio but the skill of the artist. The only thing that matters is how suitable the voice is for the project.

Yuriy: Well, when we record the English voice over, we usually ask clients if they need American or British English. Some customers ask us for other specific accents, such as African English because it is crucial to choose a voice that will resonate with their target audience. One example is when we were making a video clip for a Nigerian service to buy cars online.

Selecting the best speaker for the role is just as important as creating the art and animations. Even though many people watch videos muted, we believe an excellent voice-over is a must-have. A good voice over artist can change the way people perceive the entire video and brand.

Today with sites like Voquent, it’s easy to work with voice-over artists from all over the world.