The Neutral English Accent: Part 3 – Never argue with the facts 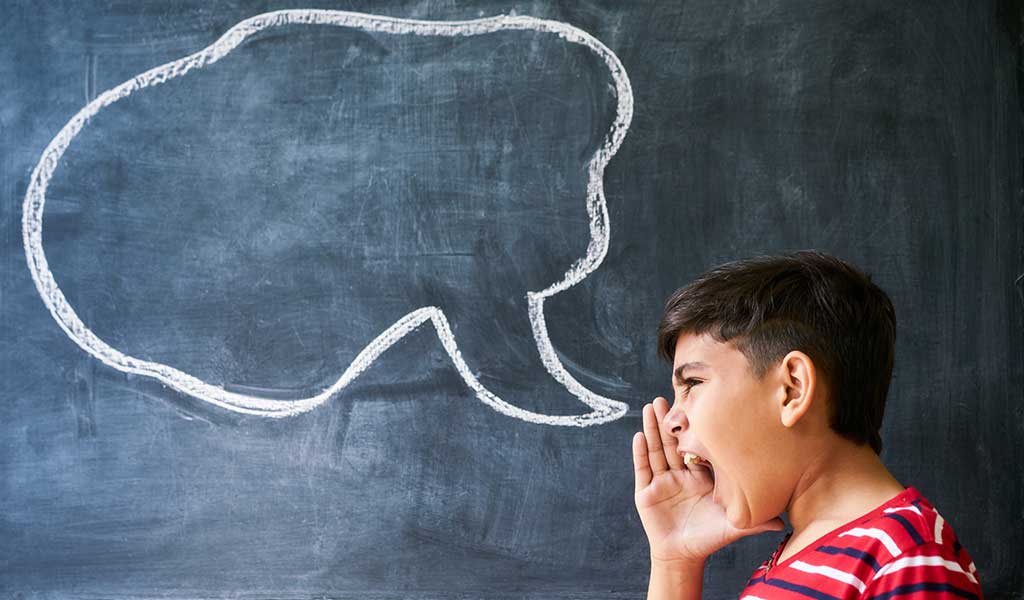 Never argue with the facts

In previous posts in this short series we have seen that voice over actors are understandably puzzled by requests for neutral accent variations when in fact, the requirement is for a regional accent such as British RP, Standard American or similar.

Likewise, a request for international variations of neutrality can be even more frustrating – ridding one’s spoken tongue of all regional heritage is easier said than done!

We’ve discussed whether the idea of a neutral accent really makes any sense? And in particular we’ve considered the view that asking for a neutral accent is like asking for a meal without seasoning. There’s no question that at Voquent we love seasoning; but we also understand that there is a unique power and depth in the ideal of neutrality which does not vanish just because that ideal is hard to attain.

So in theory perhaps there is no such thing as true neutrality: but, as always, theory lags behind the fact that a number of voice over artists on Voquent earn a significant portion of their income precisely from their brilliant variations on Neutral English.

More English than the English? Listen to voice actor Melina and tell us what you think.

Melina, for example, born in Cyprus but having spent many years in the UK, has a wonderfully articulate and familiar accent that is very close to British RP, but somehow more standardised. She achieves the remarkable feat of allowing the undertone of a Greek accent to influence her speech with such impeccable grace, it makes her sound more English than the English! Illustrating again the magical effects that can occur when we enter that ‘uncanny valley’ of near-perfect neutrality.

Another example is Ellen Dubin – an extremely successful and accomplished performer for both acting and voice work (also on IMDB). Ellen has voiced a huge variety of characters in movies and console game titles (for a stunning and mesmerizing example of a neutral accent, listen to her sample CAN-D2M18L). Her resumé brings to mind what we said in the previous post in this series about the quality of Douglas Rain’s voicing of HAL. Indeed Ellen herself has voiced a number of Artificial Intelligence’s! Meanwhile, her Star Wars battle commander is aloof and authoritative, yet she can also project authentic trust and a nurturing warmth, such as in promoting charity work.

The state of the industry 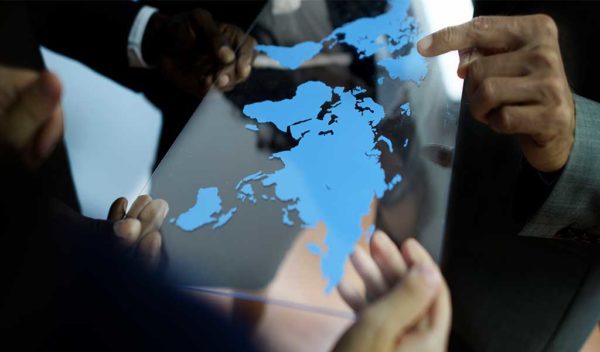 The increasing interest from Global marketeers in neutral accents, as we have seen, is somewhat counter-intuitive and yet shows no sign of letting up. In our experience, most calls for neutral accents are coming from major multi-national companies looking to run television commercials and online advertisements in huge nationwide campaigns. And it may be that the development of accent-less artificial voices such as SIRI or Alexa is influencing the human voice towards greater neutrality. A recent small study pointing out that people are suppressing their own accents in order to be better understood by their AI assistants. And if you’re Scottish you’re already well used to this, as this sketch demonstrates perfectly!

At Voquent we suspect that for many clients, the neutral accent carries connotations that someone is adaptive, knowledgeable, and well-travelled, as would be expected of someone who’s original regional accent has become an intended casualty of their communications experience at an international level.

Interestingly, Voquent increasingly gets requests for English spoken with a foreign accent by men and women of West African descent but “with the most neutral accent possible please”. There is a consistency to the logic. A continental African voice is free of the classic privileged connotations which may be easily and unintentionally evoked by a British RP, Standard American or Canadian English accent. Clients addressing a global market demographic are seeking an internationalist quality which avoids bland cosmopolitanism and western English stereotypes. 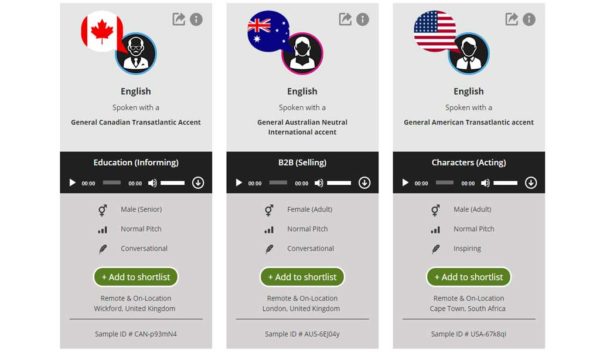 Voquent sample cards show the country of origin and the spoken language and accent.

There is bewildering variation in accent, even within the same county: Voquent tracks over 1,400 variations of regional dialects and accents, and that’s just the tip of the iceberg. This is particularly important when you consider the huge differences between versions of Canadian French and European French (as would be broadcast in France or Belgium), and the same holds for Castellan Spanish and Latin American variations of Spanish (LA Spanish) as spoken on a per-country basis by the majority of South America. The same goes for European Portuguese and Brazilian Portuguese, and the list goes on.

Yet, one of the problems with classifying neutral variations of language is that their appeal is subjective and is often open to unique interpretation depending on the country where the voice is being aired.

Classifying neutral accents is not easy, particularly given that they become increasingly rare outside of countries where English is a primary or common second language e.g. North America, Western Europe or Australia. This is also what makes Voquent so powerful for casting voice over actors where the nativity (country of origin) from which a language is spoken is as important as the regional classification of the specific accent. So for example we might have (i)  an American English voice speaking English with a General American Boston eastern New England (ENE) accent, or (ii) a British English voice speaking in English with a northern English Holme Valley (West Yorkshire) accent. These subtle nuances are incredibly important when searching for the best voice artists for a project.

To be able to support every conceivable neutral variations into our classification system, we ask voice actors to designate their language and accent by identifying the country of origin, the language spoken and then the accent or dialect description which will be one of the following: 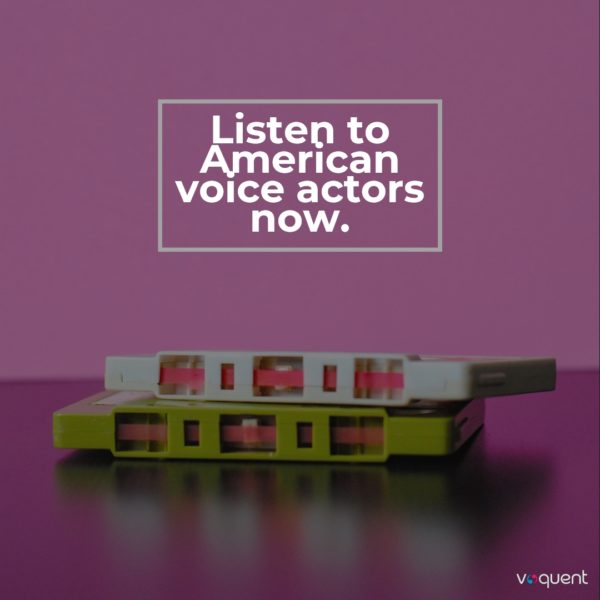 A final note for project managers, casting directors and producers

Clients who ask for neutral accents may not realise that what they are really seeking is a variation of English which has been influenced heavily by extensive continental travel (as opposed to influence from distinct countries). Yet the reality is that there are always going to be certain words that provide giveaway indications of the voice artist’s own history: either how they pronounce certain common words, how they string syllables together, how certain letters become silent, or the overall melody with which they speak.

As a practical matter of fact, many companies seeking a “neutral accent” indeed do not know exactly what they are asking for; perhaps internal miscommunication has led to a request being issued for a neutral accent when in fact what was desired was a version of Standard English spoken by one country but aimed at an entire continent (e.g. Canadian English to be broadcast nationwide in the United States and Mexico also).

At Voquent, we realise the best thing we can do is to help remind clients about the distinct differences so that they can be clear about the type of voice they are really looking for. Truly neutral variations of English are rare; yet at the same time, it is the subtle variations and divergences from that non-existent ideal which are what make each and every voice unique.

If you’re looking for voice over artists with a neutral or local variation of accent of any kind, Voquent’s got you covered!

How to Audition for Voice Over Success – 7 Top Tips