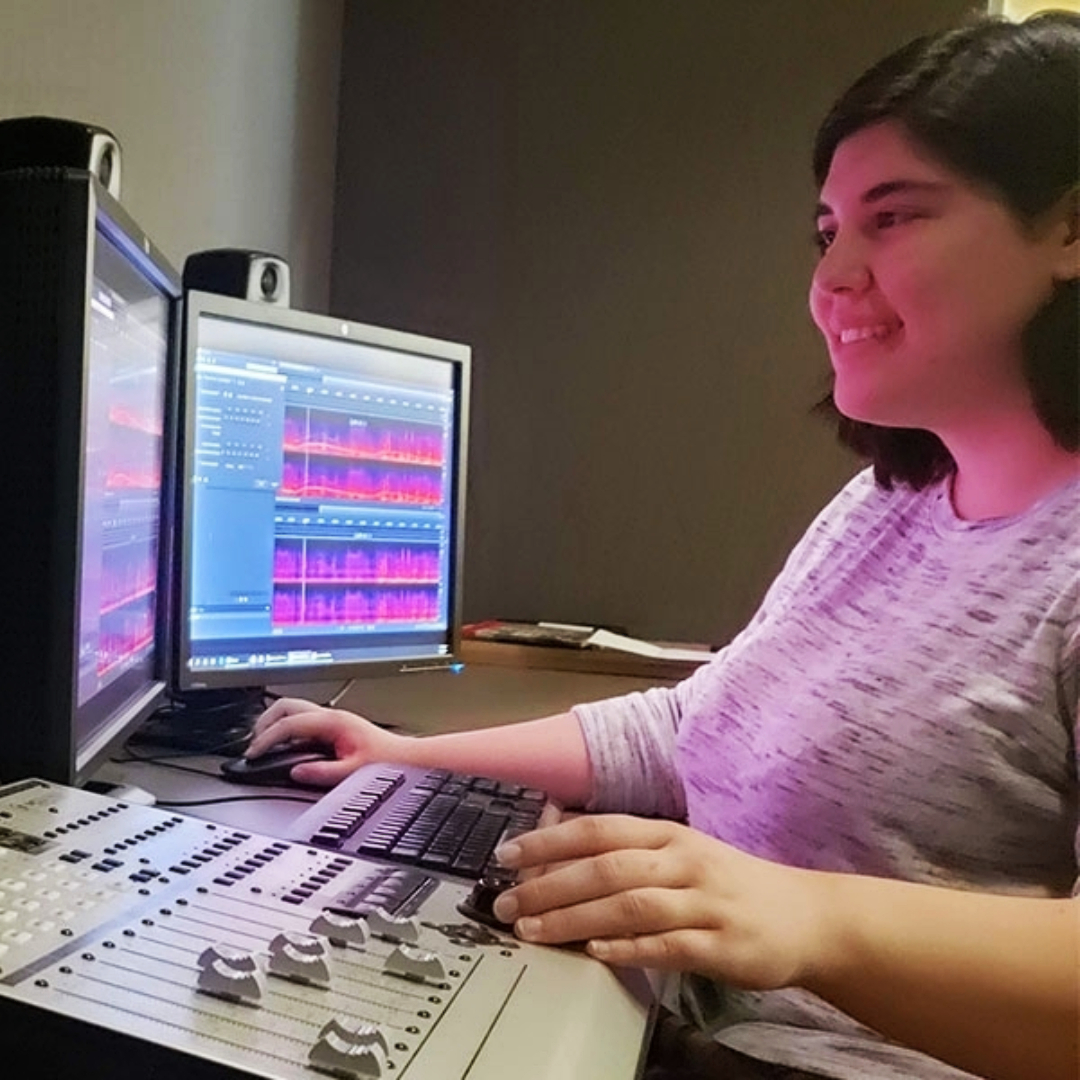 We’re delighted to announce Breanna Alonzo as the winner of the Voquent Voice Acting Scholarship 2019!

After many weeks of reviewing scholarship submissions, the Voquent team has selected Breanna Alonzo as winner of the Voquent Voice Acting Scholarship 2019. It was a really tough process but ultimately we were impressed with her diverse range of characters and the obvious effort she’d put into ensuring her submission was of the highest quality possible. Her submission demonstrated that she took the opportunity seriously and likewise our investment in time and resources would be well received.

Over the next few weeks we’ll be providing Breanna with professional home studio recording equipment and helping her to setup her studio. She’ll also receive mentorship from established industry veterans on both the business and performance side. It’s an amazing opportunity.

Breanna is currently a student at Salt Lake Community College in Utah and we sat down with her this week to learn more about her background and her motivation to apply for the scholarship.

Q: What are you studying at Salt Lake Community College?

Breanna: I am studying for a Theater degree Majoring in Acting, Musical Theater, and Stage Combat; Mainly for the experience to apply it towards Voice Acting. As a minor I am also studying stagecraft, Make-up design, and of course generals on the side. As my Theater Professor tells all of his students, “It’s better to have craft in a all departments rather than only on department.”

I very much agree with him because you can’t expect to do just acting whilst still working a waitressing job your whole life, instead why not have the knowledge in all of theater. I can apply what I learned from acting, musical theater and improvisation to my voice to give a more well thought out voice performance. Other than studying theater I am also completing my generals to further my education.

Q: Do you have any previous experience with voice over or acting?

Breanna: Yes, I have been in 3 Musicals, all at Hillcrest High school. In the Heights, Carousel, and Les Miserables. I was ensemble for the first two and I was Onlooker #3 in Les Miserables. After high school, came college theater and voice over.

As of 2019 I have been in a radio drama playing 3 different characters for the Salt Lake Community College Radio. During January of 2019 I was involved with Salt Lake Community College’s 24-hour Theater festival. What happens is anyone comes in at 8pm the previous night to audition for a group of writers and directors that have yet to write the scene. After we audition, the writers spend all night writing a scene for the actors that the directors have chosen. At 8am in the morning, all actors come prepared for a grueling 12-hour rehearsal. Once the 12 hours are up we perform our scenes exactly 24-hours after we auditioned!

On Friday October 24th I will also be acting a devised theater piece named, ‘A Sharp and Infectious Silence’. I play the protagonist who has been sexually assaulted and the current University she attends has a honor code that is running against her. This is my first college play of which I play the lead. I am very excited to perform for a sold-out show!

For the future, I’m hoping to take part in a diverse range of shows and voice-over gigs. 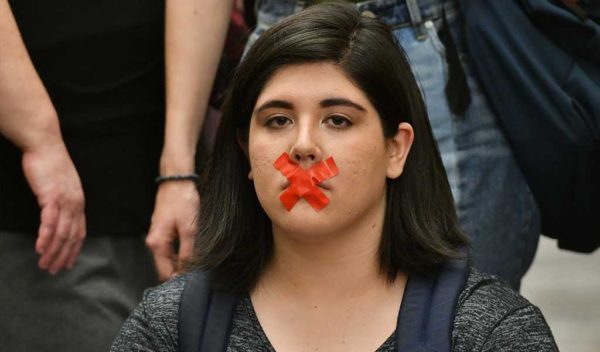 Breanna Alonzo as Celeste in the college play ‘A Sharp and Infectious Silence’.

Q: Have you always been interested in voice acting?

Breanna: I haven’t always been interested in voice acting as a career. Only recently has it really peaked my interest. Back in 2016 I was in a Digital Media class, one of our assignments was to create a radio ad using our voice. I tried it out and that was the moment I knew it was something I wanted to do.

Since then I’ve been playing with my voice trying to make new sounds and trying to figure out how cartoon voices are done. At the beginning of 2019, I joined a Voice Over class and I was taught how to create a professional demo reel, how to make my own script, and how to make a demo reel interesting – so the client gets hooked from the start. Now more than ever  I am interested in Voice Over. I want it as my career and I want to further challenge myself to create a diverse range of voices.

Q: How did you do to prepare for your submission to the Voquent Scholarship?

Breanna: I prepared my Voquent Voice Acting Scholarship submission by taking a deep breath and showcasing the best of my voice. I’ve had previous training on how to create a great demo that sounded and felt professional. I have to admit I did have a little help from my dad, he is a professional sound engineer, who made the mixing sound great.

HEY!!! This is one of my demo reels, take a listen and tell me what you think!!! I made this to explore more about my voice and what it can do. I really had fun so I hope you do to when you have a listen!!! Thanks!!! #voiceacting #characteracting #voice #demoreel #voquentscholarship2019 @voquent

During the recording sessions struggled to find the right voice at times but in the end I found that as I kept going I got more into the character voices, and in turn the takes I recorded improved.

Q: Your submission included a variety of character voices, which voice do you enjoy performing most?

Breanna: The voice I enjoy performing the most is my Terry Gamaguchi voice. This voice is inspired by Veronica Taylors, ‘Ash Ketchum’ voice from the original season of Pokemon.

Q: What does winning the Voquent Voice Acting Scholarship 2019 mean to you?

Breanna: Winning the Voquent Voice Acting Scholarship 2019 to me means I can have a career in voice acting. It means that I can finally get ahead of the game with professional help that I dearly need. It means that this could be the beginning of my voice acting journey. This means so much to me and with every moment that goes by I am so very grateful.

Q: Who is your favourite voice actor of all time?

Breanna: My favorite voice actor all time is Tara Strong, she is one of the most inspirational, iconic, and most amazing voice actress I’ve ever had the pleasure to hear. I’ve grown up with her voice my entire life. What I admire most is the fact that her voice is so malleable and diverse. She can play young boys really well, she can play older folks very well, and she can sing amazingly well. For most of my childhood she was always in the cartoons that I watched, because of her she gives me hope for my future in voice acting. 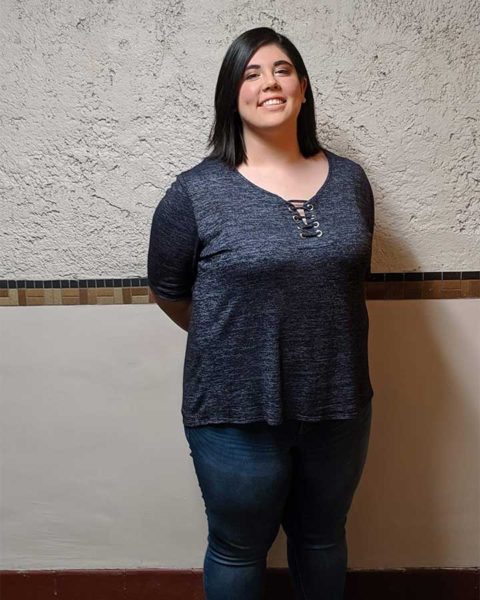 Q: What is your dream voice over role?

Breanna: Being an animator used to be the career I aspired to but it’s just not for me. I’m much better suited to voice-over acting but I’m very passionate about the animation business and this is definitely where I see myself in the future.

My dream role is to voice a cartoon character, whether it be for children or adults I would love to be that inspirational voice that people hear throughout their life.

For example if I could voice a character in a children’s TV  show I’d love to do something in Steven Universe. On the other hand I don’t really have a preference for adult animation, any role would be fine by me!

How it works at Voquent