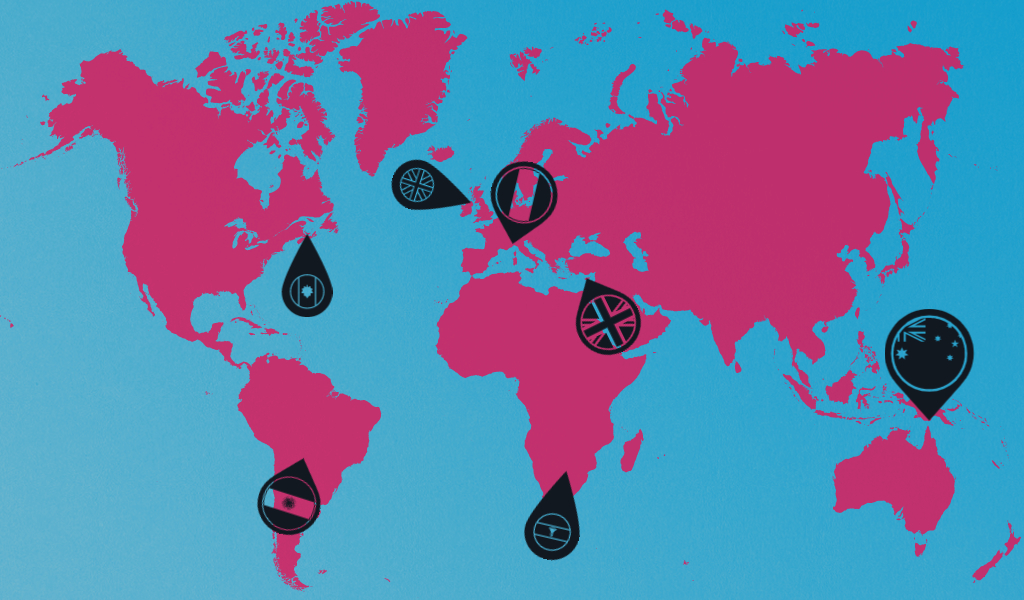 The world, with its varied languages and complex borders, can be a really bizarre place.

There are thousands of people of different ethnicities and linguistic ancestries living side by side. Huge, sprawling metropolitan cities like New York, Hong Kong, Sao Paulo, and Istanbul are prime examples of cities within multilingual countries.

An exclave is when a territory, be it political or culturally different, is cut off from its main territory. An enclave is always surrounded, but exclaves aren’t necessarily surrounded on all sides.

In this sense, enclaves and exclaves are often one in the same, but specific examples of Exclaves exist. Generally, people often use the term ‘enclave’ when referring to both.

So, why is this important? Well, if you are a casting director for example, it is crucial to understand that your market might be more linguistically complex than it may first seem.

There are many multilingual countries in which big enclaves exist. This might open-up the possibility of needing two languages, or a translation service, for your project. At the very least, you may want to consider renditions of your project in different accents for a more localized, personal feel.

With all that said, let’s delve into some of the most notable enclaves and exclaves that exist today.

The Torres Strait Islands are mostly part of Queensland, a state of Australia, and are governed by the regional Torres Strait Regional Authority. This authority is run by the Federal Australian Government. It is enclaved within Papua New Guinea, and over 4,000 Australians call it home.

This means that the islands have a complex linguistic makeup of local indigenous languages and English. Native languages to the islands are languages such as Kalau Lagau Ya, Meriam Mir, and Torres Strait Creole.

What makes the situation weirder is that most people living on these islands are natives of the islands. Why is this weird? Well, this means they are technically considered aboriginal Australians, despite being culturally, socially, and linguistically different from mainland aboriginals.

Y Wladfa, Welsh for “The Colony” and also known as Y Wladychfa Gymreig, is a Welsh settlement within Argentina. While Y Wladfa is not considered a political enclave of Wales or the United Kingdom, it can be viewed as a linguistic and cultural enclave.

Y Wladfa began in 1865, primarily on the coast of Argentina’s Chubut Province in Patagonia. However, since 1865, a few more Welsh-founded settlements have sprung up. In today’s world, the Welsh-Argentine communities are generally found in Gaiman, Trelew, and Trevelin. In total, there are around 50,000 people that live in these communities.

Out of this population, the main languages spoken are both Argentine Spanish and Patagonian Welsh. As per the last census, it is thought that there are around 1,500 – 5,000 native Patagonian Welsh speakers alive today in Argentina.

Europe has many small enclaves dotted about its many borders and many multilingual countries, but there is one enclave that is particularly interesting. The Italian enclave of Campione d’Italia within Switzerland.

The enclave is officially a Province of Como in Lombardy, but it is entirely surrounded by the Swiss Canton of Ticino. So far, Campione d’Italia is the smallest enclave featured on our list, with a total area of 2.68 square kilometers or 1.03 square miles.

While the town is within the Italian-speaking region of Switzerland, Switzerland itself also has German, French, and Romansh speakers. Many of the nation’s areas are bilingual or even multi-lingual natively.

The town has a detailed history that has much to do with Swiss neutrality in the various conflicts of Europe. For example, during the Italian wars of unification in 1848, the town petitioned for Swiss annexation, which was subsequently denied.

The enclave was even used as a United States staging post of Strategic Services, the CIA’s precursor, during World War Two. Currently, it has a population of just under 2,000 people.

Nova Scotia, Latin for “New Scotland”, is a province of Canada located on the nation’s East Coast. It exists as one of Canada’s three maritime provinces and one of four of Canada’s Atlantic provinces.

Nova Scotia has a rich history, originally being inhabited by the Mi’kmaq nation before European colonists arrived. According to records, the French were the first Europeans to break ground in 1604. However, the Scots Gaelic speaking communities of Nova Scotia trace back to 1621 when King James IV of Scotland issued the colony foundation charter.

It wasn’t until 1629 that William Alexander established the first thriving Scottish colony in what is now the Maritimes after several failed colonization attempts.

Nowadays, some Nova Scotians speak a variant of Scots Gaelic called Canadian Gaelic. As per the last count, it is thought that as many as 4,000 people speak some form of Gaelic that descends from Scots’ Gaelic in the Maritimes.

The island of Cyprus is a very complex place politically and culturally. For such a small place, it is divided like no other place of its size in the world. The island is divided into three nations; Greece, Turkey, and the United Kingdom.

The South of the island is controlled by Greece and primarily consists of Greek Cypriots.

Finally, Akrotiri and Dhekelia are two areas of the island under the control of the United Kingdom. While these U.K. areas are a military base and a power plant, it also includes land around these two areas of interest that consists of the civilian population.

What this has led to is a multi-lingual island only 254 square kilometres (or 98 square miles) in size. This is something that is unique to Cyprus and has not been replicated in any multilingual country since to this kind of scale.

Cypriots, depending on what section of the island they are from, speak English, Greek, or Turkish, respectively.

While the region has been historically contested by both Irish Republicans and Northern Irish Unionists loyal to the U.K. Union, Northern Ireland has the Republic of Ireland surrounding its only land border. The territory is also enclosed by the Irish Sea and the Atlantic Ocean.

This creates a situation in the North of the isle of Ireland where there exists a mixing of different English dialects and Scots dialects. There is not a general consensus if Scots, or the Northern Irish variant of Scots called Ulster-Scots, are languages or dialects.

However, Northern Ireland proves to be an exclave of Ulster-Scots, Scots, English, and Irish English for a population of just under 2 million people.

The last entry we are mentioning on our list of interesting enclaves and exclaves is Lesotho, otherwise known as the Kingdom of Lesotho, enclaved within South Africa.

Lesotho holds a unique place on this list because it is a sovereign nation that is fully enclaved inside of another nation, and therefore it is an enclave but not an exclave. This status is only held by two other nations; the Vatican City and San Marino.

The nation is one that has an intriguing structure, with a unitary government structure that has a parliament but also a constitutional monarchy. In this fashion, its political structure is similar to that of the United Kingdom.

With a total area of 30,355 kilometres squared (11,720 square miles) and a population of just over 2 million, it is no small nation like the Vatican City or San Marino. The linguistic divide in the nation is between English speakers and Sesotho speakers, with around 99% of the nation having Basotho ethnicity.

As this list details, the world and its multilingual countries can be a very divisive place.

Political boundaries don’t always fall along with ethnic divisions, which can result in very unique linguistic structures of particular nations.

Know of any others we missed? Were surprised to learn about certain regions? Let us know by joining the conversation on Twitter!