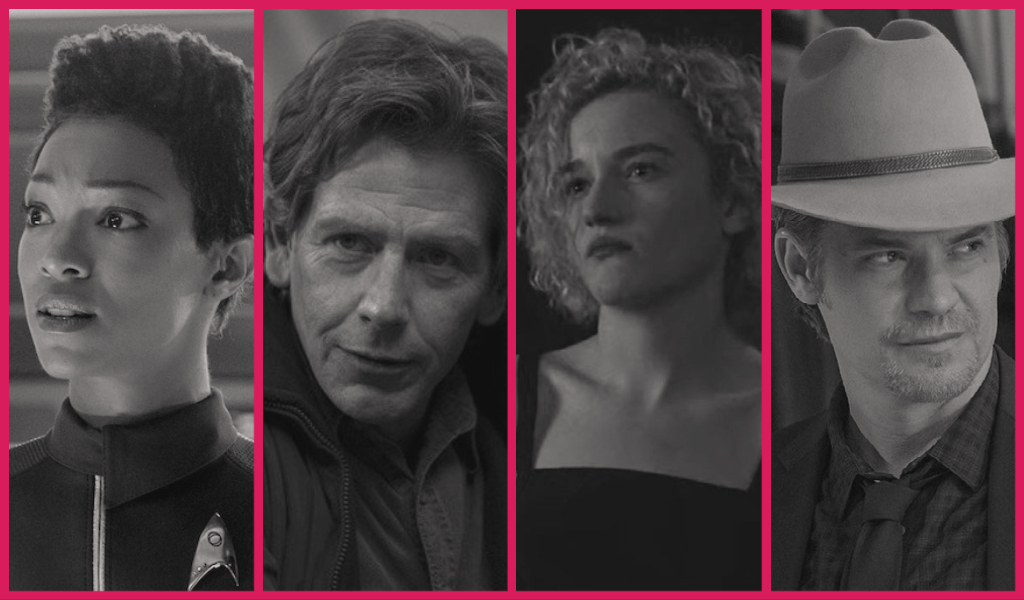 The world of television is a beautiful, vast ocean of ideas and stories—there is something for everyone.

Be it the gunslinging glory of Justified or the bashful comedy of Brooklyn Nine-Nine, television has entertained us throughout our lives.

Television voice-over, when used correctly, can be a powerfully potent storytelling tool. It can add value to the characters, the plot, and the development of the over-arcing story without breaking immersion, but it is a fine line to walk. There are some terrible examples of television voice-over— looking at you NCIS—but equally, there are some hidden gems you may have missed.

The upcoming list commemorates the latter. Let’s take a look at some of the best examples of voice-over on television, be sure to watch out for spoilers!

We are starting this list with Justified, FX Network’s backburner TV show, one of the best-rated TV series ever (8.6 IMDB). Having begun airing during the middle of Sons’ of Anarchy’s reign on FX probably didn’t help the show pick up the popularity it deserved, but that didn’t stop it from realizing its true storytelling potential.

Set in the Eastern District of Kentucky, specifically around a place called Harlan County; a place deep in the bible belt fueled by the economics of coal mining. The story revolves around U.S. Marshal Raylan Givens. Given’s is sent back to his hometown, and a nest of bandits, drug dealers, and kingpins quickly becomes his problem, notably his father and former best friend.

While Harlan County is a real place, the Harlan county in the show is fictional. However, this place’s mythos helped to build up one of the best singing voice-overs on television.

Harlan county is hostile to outsiders in the folklore of the area, and thus many songs have been written about its deep, dark hills and unmarked graves. Not only does the song ‘You’ll Never Leave Harlan Alive’ play a vital role in this mythos, but it helps build up story expectations with its consistent use throughout the show. Its multiple covers by multiple voices each add a unique dimension.

While not strictly voice-over in the traditional sense, the unique dimension it has on the show’s story was too good to leave out of this list.

One of Netflix’s Originals, Bloodline, seemed to slip under the radar. From the Orange Is the New Black and House of Cards era, Netflix’s success with these other original shows saw Bloodline unintentionally having to compete for viewership and becoming somewhat overlooked.

Bloodline’s story focuses around a picture-perfect Florida family that, behind the curtain, is at a breaking point. When the black sheep of the family returns, dark secrets re-surface, fueling a disturbing sibling rivalry.

What is unique about Bloodline is that it uses a television voice-over to complement the storytelling. The voice-over drives the narrative forward while not giving too much away. Later it is revealed that the voice-over is not external, in that it is breaking the fourth wall, but rather a recording of John talking about the events.

The voice-over added a dimension of realism to the plot, making the show riveting to watch, and certainly one I will never forget.

Its first 3 minutes of air time hooked me immediately. I was filled with a unique curiosity that no TV show has previously managed with a voice-over montage sequence. Usually, this dramatic technique is cliché and overused, but Ozark takes an old approach and breathes new life into it.

“Oh, another Breaking Bad” is a common thing to hear when people discuss the show, and they’re not wrong, but Ozark stands out for its frequent use of narrative storytelling with voice-over segments.

The show finds a focal point around Jason Bateman’s character Marty Byrde, a savvy financial advisor that finds his home in Chicago. However, things take a turn for the worse when he is forced into laundering money for a drug cartel, leading him out to the Ozarks.

The first scene is powerful as it is potent, an excellent example of an opening that can hook its viewers. Pivotal to the success of this opening is the excellently written and perfectly acted voice-over from Jason Bateman. The execution and juxtaposition of the process of laundering money for the montage sequence, over a motivational client pitch, fits almost too perfectly.

Marty Byrde’s opening monologue is a prime example of how voice-over can immediately engage viewers within the confines of the story, without breaking the fourth wall, to help create a truly compelling narrative.

To finish off this list, it would seem disingenuous not to include an entry from Star Trek. The franchise has been running for decades. One thing that is universal across every iteration of the show is the famous ‘Captain’s Logs’ – usually at the start of every episode. How could we have a list about television voice-over without including an entry from a franchise that popularized the technique?

Any Trekkie will tell you that they love a good Captain’s Log. While that may sound nerdy—and it probably is—there is no denying the impact Star Trek’s opening voice-over has had on generations of fans. Star Trek popularized and pioneered voice-over in television without breaking the fourth wall, which set up the stage for many other shows to follow suit.

There are hundreds of Captain’s Logs to pick from, but I decided to go with an example from the most recent Star Trek show, Star Trek: Discovery. While this example isn’t strictly a Captain’s log, but rather just a personal log, it follows the same style. Something about the calm, collected demeanour of Michael Burnham (played by Sonequa Martin-Green) makes the voice-over soothing and entertaining to hear. This voice-over progresses the narrative, informs the audience, and prepares the audience for what they expect to see. It also doesn’t serve to invoke emotion in the audience, but rather it seeks to inform the audience.

The application of television voice-over is usually there to engage audiences emotions and anticipation rather than inform. What is unique about Star Trek is how they flip this storytelling device on it’s head, but also how this works so well within the show. Michael’s log captures everything I love about a Star Trek Log in one clip; everything from the authoritative undertone to the specific phrasing, all without being too wordy or difficult to follow. It even includes the bonus of a smooth transition into the story!

So, there you have it. My top picks for brilliant television voice-overs that you’ve never heard of – brownie points if you have! What are your thoughts? Did I miss any?