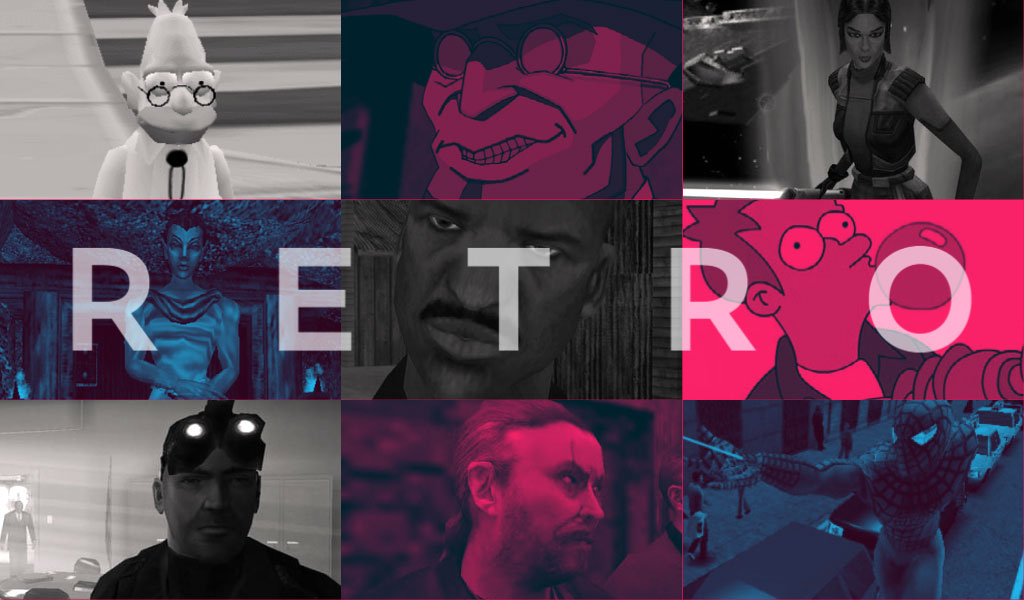 With unlockable levels and characters. Finite health bars and power-ups and hours of fun with what looked – for the time – like state-of-the-art graphics. I made some of the best memories playing retro games in my youth.

I have always gravitated towards retro games, and some have remarkable voice actors. So, let’s take a look at famous video game voice actors from gaming’s golden era, pre-2005.

We are kicking off the list with by far one of the most famous actors of all time. Samuel L. Jackson is a world-renowned actor. He has an impressive resume with films and franchises such as Pulp Fiction, The Hateful Eight, Star Wars, and Marvel. And that’s just scratching the surface! Samuel is known as a down-to-earth, pragmatic person off-screen and one of Hollywood’s best on-screen.
But did you know he has a credit in one of the most recognizable titles in the gaming world – Grand Theft Auto: San Andreas? Yep, Samuel’s on the credits! Some hardcore fans of the game will already know this, but Samuel L. Jackson plays one of the game’s main antagonists. His voice is one of the first you hear in the game, and he voices the corrupt Police Officer, Officer Tenpenny.

Fun Fact: GTA San Andreas is still bought and played today all these years later. It still has a very active multiplayer modding community on PC.

ticking with the same game genre, True Crime: Streets of LA has a famous voice actor in its midst. While not as renowned as Samuel L. Jackson, Gary Oldman has a detailed list of Hollywood appearances.

With roles such as Gordon in The Dark Knight and George Smiley in Tinker Tailor Soldier Spy, he has carved out a niche for himself. One of his more antagonistic roles is his role in The Book of Eli, being the main antagonist against Denzel Washington’s.

Going back to 1997 and digging deep into retro gaming, we find the Western shooter Outlaws. Outlaws may not be as famous as the first two entries on the list but is also notable. The game has generally been lost to the mists of time but featured the first-ever sniper zoom function in a shooter game. The graphics leave a lot to be desired nowadays, but the game’s plot is admired as a “movie-worthy experience” by game critic Chris Hudak. John de Lancie is also in the voice actor line up so it must be true.

Fun fact: Outlaws was made by Lucas Arts, who made the early Star Wars games.

John de Lancie is known for his on-going role of Q in the Star Trek universe. This role extends all the way back to Star Trek The Next Generation (1987). However, his most recent casting as the character Q was in Star Trek Lower Decks (2020). In Outlaws, he plays the interesting character Matt “Dr. Death” Jackson. Beyond this, de Lancie has also featured significantly in another big gaming franchise, Assassin’s Creed – where he plays the estranged father to Desmond Miles, William Miles.

Another iconic game of the early 2000s marked the beginning of the Tony Hawk series Tony Hawk’s Pro Skater first hit shelves back in 1999. The game started a lucrative franchise that brought us some of the best skateboarding games ever made. Without the franchise, skateboarding wouldn’t be what it is today, and these games spawned a whole new generation of skaters.

The game itself includes Tony Hawk as a playable character (of course) voiced by the legendary skater himself. Other famous skateboarders followed, such as Bob Burnquist, Kareem Campbell, Chad Muska, and Bam Margera, also speaking as their game characters.

While Tony Hawk and his fellow skaters aren’t voiced actors, there are very few self-acted video games, making this game unique and worthy of a mention! For many of these skaters, this was their first introduction to the acting world. Some, like Bam Margera, later went on to star in productions like MTV’s Jackass.

Even if you’ve been living inside a vault, waiting out recent politics, you will still have heard of Skyrim. A massive success played by millions worldwide on six different platforms across a multitude of console generations. However, before Skyrim had its day, it was preceded by the game series’s fourth and third instalments. The third, Morrowind, was released in 2002.

During its release, it garnered a lot of attention and fame for its groundbreaking world-building mechanics. TES 3 is mainly a text-based game compared to TES 4 and TES 5 that have a lot of voice acting in them. That said, voice lines serve as a small part of TES3 Morrowind, even if limited.

You’ll be surprised to know that actress and 1972 Miss World, Lynda Carter, voiced some of the game’s few lines. She is best known for her role as Wonder Woman between 1975 and 1979.

Did you know Futurama is both a famous cartoon and a video game? Millions across the world love Futurama as one of the best-loved young adult-themed cartoons made. It had a very successful run, originally airing in 1999 and finishing in 2013, spanning ten seasons.

For those who like the franchise, you will no doubt know about the 2003 Futurama video game. Some games based on TV or film franchises didn’t cast the original actors for their video game counterparts (yes, I am referring to you, Lord of the Rings). But Futurama didn’t shy away from this. Billy West, and a lot of the other famous names that brought Futurama to life, feature in the video game.

Like Tony Hawk, this isn’t an example of self-acting, but rather a famous actor reprising their role in the video game world.

Fun fact: The early Star Wars games were made in the Dark Forces engine developed by Lucas Arts. This was the same game engine used in Outlaws further up this list.

While Jennifer Hale is famous in the voice acting world for her role in Mass Effect, early in her career she landed several parts in classic Star Wars games. One of these parts was voicing the female versions of the main character, Jaden Kor, in Jedi Knight: Jedi Academy. As well as a leading role in another Star Wars RPG franchise, playing Bastila Shan in KOTOR.

As far as famous video game voice actors go, Michael Ironside is not only notable but has also acted on screen in the past. He is best known for playing Jean Rasczak in Starship Troopers, Richter in Total Recall, and Jester in Top Gun. He mainly picks up antagonist roles and has a strong ‘that actor you have seen somewhere before’ profile. He has been in shows such as Justified, The Flash and has been in many TV movies.

Of course, one of his defining roles as a voice actor is playing the one and only Sam Fisher. From the franchise’s initial inception on the video game scene back in 2002, Michael has played the iconic Splinter Cell character in 8 different games, 2 of which Sam Fisher is a cameo role. The last time he played the character was in 2010 with Splinter Cell Conviction.

Another classic retro game and one that has filled many childhoods with joy. The Simpsons Hit & Run game. Much like the Futurama game, this game features characters from the famous cartoon and the voice actors that play them. Dan Castellaneta plays a variety of roles in the hit cartoon show and reprises these roles in this game and the Simpsons Movie.

Easily one of the most famous voice actors out there, Dan brings his best to the game. The game itself features many beloved Simpsons’ characters like Marge Simpson, Bart Simpson, Lisa Simpson, Milhouse, and many others voiced by the show’s talented voice actors. Dan himself also performs as Grampa Simpson, Barney Gumble, Krusty the Clown, Groundskeeper Willie, and many others.
What talent!

Fun Fact: The game’s trailer was released initially using a VHS tape. You can hear the telltale buzz of a cathode tube TV at the beginning of the trailer.

Finishing off this list of famous video game voice actors, we have Tobey Maguire for his role in the classic PS2 game Spider-Man 2. Spider-Man 2 was initially released back in 2004 and followed the one and only Peter Parker fighting crime in New York City.

The game is a fondly remembered classic from the PlayStation 2 era and featured other famous actors in its line-up. Kirsten Dunst plays Mary Jane Watson, and Alfred Molina plays Doc Ock, their respective film characters. It is known as one of the best Spiderman games to date, with game mechanics that rival the modern Spiderman games.

So, there you have it! A list of 10 famous video game voice actors and their retro gaming heritage.